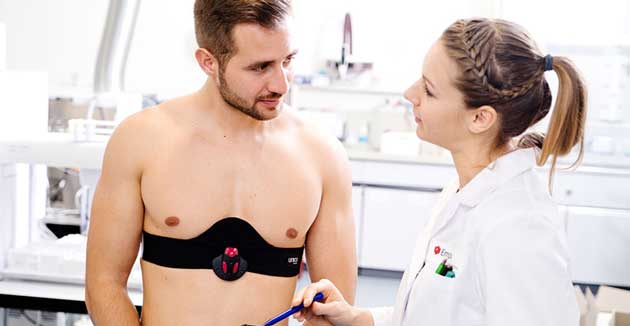 The Swiss research institute for applied materials sciences and technology, has announced that its researchers in collaboration with clinical partners (Cantonal Hospital and the Geriatric Clinic in St. Gallen) are working on the development of a new diagnostic tool that can be used to detect the first signs of neurodegenerative changes using a sensor belt. Alzheimer’s and other dementias are among the most widespread diseases today and are complex to diagnose and can often only be established with certainty late in the course of the disease.

Forgetfulness and confusion can be signs of a currently incurable ailment: Alzheimer’s disease. It is the most common form of dementia that currently affect around 50 million people worldwide. It mainly afflicts older people. The fact that this number will increase sharply in the future is therefore also related to the general increase in life expectancy.

If dementia is suspected, neuropsychological examinations, laboratory tests and demanding procedures in the hospital are required. However, the first neurodegenerative changes in the brain occur decades before a reduced cognitive ability becomes apparent. Currently, these can only be detected by expensive or invasive procedures. These methods are thus not suitable for extensive early screenings on a larger scale. Empa researchers are working with partners from the Cantonal Hospital and the Geriatric Clinic in St. Gallen on a non-invasive diagnostic method that detects the early processes of dementia.

For the new method, the researchers Patrick Eggenberger and Simon Annaheim from Empa’s Biomimetic Membranes and Textiles lab in St. Gallen relied on a sensor belt that has already been used successfully for ECG measurements and has now been equipped with sensors for other relevant parameters such as body temperature and gait pattern. This is because long before memory starts to deteriorate in dementia, subtle changes appear in the brain, which are expressed through unconscious bodily reactions.

These changes can only be recorded precisely when measurements are taken over a longer period of time, though. “It should be possible to integrate the long-term measurements into everyday life,” explains Simon Annaheim. Skin-friendly and comfortable monitoring systems are essential for measurements that are suitable for everyday use. The diagnostic belt is therefore based on flexible sensors with electrically conductive or light-conducting fibers as well as sensors for motion and temperature measurement.

To enable such long-term measurements to be used for monitoring neurocognitive health, the researchers are integrating the collected data into in-house developed mathematical models. The goal: an early warning system that can estimate the progression of cognitive impairment. Another advantage is that the data measurements can be integrated into telemonitoring solutions and can thus improve patient care in their familiar environment.

The human body is able to keep its temperature constant in a range of 1 degree Celsius. The values naturally oscillate in the course of the day. This daily rhythm changes with age and is conspicuous in neurodegenerative diseases such as dementia or Parkinson’s disease. In Alzheimer’s patients, for example, the core body temperature is elevated by up to 0.2 degrees Celsius. At the same time, the spikes in daily temperature fluctuations are dampened.

In a study, the researchers have now been able to show that altered skin temperature readings measured with the sensor belt actually provide an indication of the cognitive performance of test subjects – and can do so well before dementia develops. The test subjects in the study included healthy people with or without mild brain impairment. This mild cognitive impairment (MCI) does not represent a disability in everyday life, but it is considered a possible precursor to Alzheimer’s disease. The subjects took part in long-term measurements and neuropsychological tests. It was found that a lower body temperature, which fluctuated more throughout the day, was linked to a better cognitive performance. In individuals with MCI, body temperature varied less and was slightly elevated overall.

The heartbeat is also subject to natural variations that show how our nervous system adapts to sudden challenges. The small silence between two heartbeats, about one second in duration, has great significance for our health: If this pause always remains the same, our nervous system is not at its best.

A study by researchers from ETH Zurich determined that poorer measurements in older, healthy people can be improved within six months through cognitive-motor dance training. In these “exergames,” the test subjects imitated sequences of steps from a video. In contrast, participants who instead only trained in straight lines on a treadmill, but also trained their memory, benefited less.

“The point is to intervene early with appropriate training as soon as the first negative signs can be measured,” says Patrick Eggenberger. “With our sensor system, any improvements in cognitive performance can be tracked through movement-based forms of therapy.” Studies with long-term monitoring will now be used to clarify how the sensor measurements can be used to predict the progression of mild brain disorders.